Bloodlust in the barnyard...

We went to feed the chickens yesterday and discovered that Goldfeather had been attacked! The poor thing had the majority of the feathers on the left side of her jaw plucked off and a little blood was drawn. We seemed to have come in just after the initial incident since there was a bit of blood spatter visible on the nesting box. We did what any modern wannabe farmer would do, ran to the internet and researched chicken attacks. 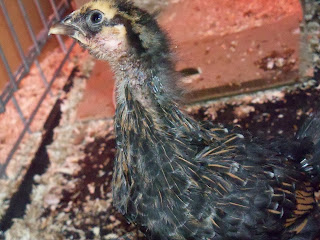 There are so many poultry resources out there and very few are consistent in their advice. Some say that this is a regular event in chicken world and a consequence of working out a pecking order. Others insist that this behavior is a result of boredom or lack of protein in their diet. One thing that they all agree on is that if a chicken starts to bleed - look out. Mild mannered chickens are easily transformed into crazed cannibals, tearing furiously at the injured bird. It's sort of a cross between the Birds and Night of the Living Dead.

It's hard to imagine Ginger and MaryAnne feasting on their feathered friend but evidently it is not that uncommon.

So what do you do when your birds turn on one another?

Some sites say remove the bird that is being picked on, others say take out the aggressor. Each has its drawbacks. If you take out the picked on bird it is guaranteeing that when that bird is reintroduced to the flock it will be at the bottom of the pecking order. We might be back at square one. Taking out the aggressor sounded good, but we couldn't figure out who was being the bully.

We opted to experiment. Some sites mentioned boredom so we added another perch and something new: bugs. No, we don't let bugs go in the cage, but we gave them a few mealworms (the lizard's food) and watched. We had the happiest, most excited, busy chickens around.

Percy feeding bugs to the birds 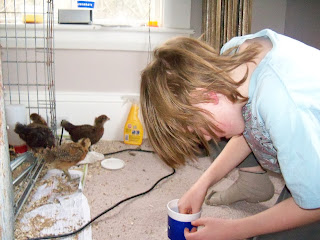 We got Goldfeather cleaned up, but left her with her friends and there have been no further signs of abuse (knock on wood.)
Posted by City Kid Farm at 4:18 PM