In the very short time that the chicks were in the dog crate they grew. And grew. It seems almost as if they had been eating spinach or exposed to gamma rays because, wow, they got huge in a very short time. After a brief (and loud) discussion about the future of chickens in our closet, we resolved to converting the teenager room in the basement into a chicken room.

When the realtor took us on our first tour of this house, the odd little finished room in the basement was sold as "perfect for teens." Maybe teens who are trolls or something from that 70s movie Don't Be Afraid of the Dark. It's damp and chilly and kind of creepy. There are no windows and the closet has an odd hole in the back that looks like an escape hatch for scary things that live in the walls (see Don't Be Afraid of the Dark.) Teenagers may be damp and cool and kind of creepy at times, but they still need daylight. The former owners told us that the teen who inhabited the room before they moved in used the windows outside the odd little room to come and go at night. This had us more worried about teens that do not belong to us coming and going at night than the future teens that will. The former teen room still boasts a faint pencil scrawl of "I hate my life" on the wall. We are very happy that this room is now dedicated to a much more positive use. Hopefully from now on it will be referred to as the chicken room and we can put the "teen room" to rest. 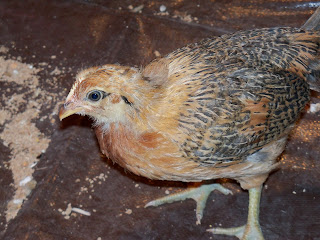 The chicks are enjoying their freedom. They run at each other, puff up their chests to show off, and generally get a lot more exercise than if they were cooped up in the dog crate all day.
Posted by City Kid Farm at 9:06 PM