The chickens have landed

We headed off to the Danvers Agway on Thursday to pick up our chicks. It turned out to be a good move. In the three hours since they had the chicks in stock, most of the Ameraucana chicks had been sold. We bought four of these chicks and two Gold Lace Wyandottes. Our oldest boy, "Percy," has been researching chickens and had his heart set on a Plymouth Rock. Unfortunately the farm store didn't have any in their shipment. He went with the Wyandottes after the very knowledgeable young woman at the store assured him they are great layers with very attractive plumage. 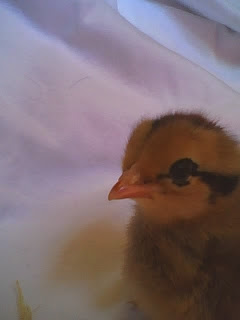 So what's the deal with the Ameraucana?

We decided on Ameraucana chicks after my cousin, who has been raising chickens, recommended them as friendly and attractive birds. She gushed over the unique color of their eggs and the beauty of their large, dark yoke. We got some great advice when we mentioned that we were looking for Ameraucanas to a sales guy at the Dodge Grain Co. in Salem, NH, (yes, we do visit a lot of agricultural stores.) He was thrilled to tell us of his own positive experiences raising them and the looks on people's faces when he showed them round, blue eggs.

They do make very pretty chicks with stripes and blocks of rich color. As you can see above, dark stripes around their eyes make them look like they're wearing makeup.
Posted by City Kid Farm at 7:45 AM