Ginger or the Professor? 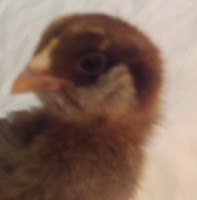 We've been wondering what we'd do if one of the chicks turns into a he rather than a she. You see, I've been getting a strange vibe from Ginger lately. She's a pretty chicken with a terrific set of yellow, symmetrical eyebrows. She looks as if she has been preparing for a movie scene. She has a lot of personality too. While the other chicks run off, peeping in excitement any time there is a new sound or movement, Ginger sticks her head up to find out what's going on. Even after she suffers the indignity of our sloppy photo shoots, she's happy to let me pet her or comes running over to find out what's next. 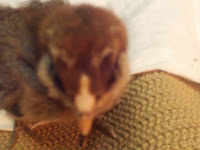 According to The Chook Shed, there are a variety of ways to "sex" a chick, none of which are 100%. This is what the hatcheries do before shipping chicks off for sale. These methods range from looking at the color or length of a chick's legs to noticing feather colors. To top it off, the methods used don't work for every breed. Behavior is also an indicator of gender in chickens. It's the rooster's job to look out for the flock, therefore he's less frightened, more alert and often more sociable with humans. This realization is disappointing because we really enjoy Ginger and we don't like the obvious options of what to do if one of the chicks turns out to be a Chuck.

During a recent conversation about chickens, a friend mentioned keeping a chicken as a house pet. We're pretty open to animals and our menagerie includes a turtle, snake, lizard, hermit crabs and ants along with the standard dog and cats. But a house chicken would take us to a whole new level of crazy. Do people really keep chickens in the house? With a simple google search we discovered that, yes, while crazy, more and more people are indeed keeping chickens in their houses. But how in the world would you deal with all that poop indoors? Another quick search showed where crazy gets you: the chicken diaper. Not only are chicken diapers for sale, but there are multiple sites that show the step by step process of making them.

So if Ginger does indeed turn into the Professor, or Gilligan for that matter, it seems we have more options than we originally thought.
Posted by City Kid Farm at 5:52 PM