Thelma, Louise and the Post-Feminist Chick 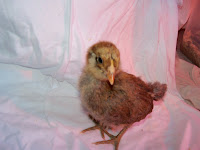 Yes, the adults got to name these two, but we're going to wait a little while before showing the kids this film.

The plan was to keep four chickens and give two away. A colleague at work showed minor interest in the two up for grabs and that developed into a definite "yes" in our minds. "Phew, the chicks have somewhere to live!" Sadly, he was cut back on a second job and the expense of building a coop was too much to bear at this time. We poked around half-heatedly looking for a home for the two girls but, as I was afraid, they began to grow on us and soon had names. Once you name an animal, getting rid of it is near impossible. 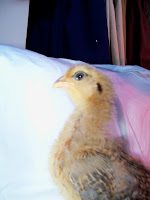 Originally, we (the adults) wanted to give the four girls the kids' great-grandmothers' names; Tilly, Miriam, Margaret and Mildred. We were convinced they were great names for any young chick. But we were out voted by the boys. We ended up with Lizzie, Goldfeather ( Goldie for short), Ginger, MaryAnne, Thelma and Louise.

Ginger and MaryAnne certainly are not a common part of our kids' generation where Drake and Josh and ICarly dominate the just below and tween world. Call us crazy, but the kids don't have access to much tv and, for the moment, will take our recommendations for stuff to watch on the computer. They have been fed a diet of reruns full of actors long gone.

When it came to names Wednesday and Morticia didn't quite flow, Lilly and Marilyn would have been nice, but Ginger and MaryAnne had a ring to it even if the characters they stem from are representations of gross stereotypes and embody tragic views of femininity. Our boys are terrific with the silliness these shows present to them. As our 7 year old boy "Billy" said the other day after seeing a woman act weak and ask for help, "That's so crazy since everyone knows that girls are stronger than boys." To put this in context, the girls had just won a pull up contest at recess. It's a modern world and each generation is becoming more open to equality all around. We can only hope that this is still the case when they move beyond our influence and into adolescence.

Obviously, the adults preferred to embrace our girls as post-feminist chicks. Sure we could have gone with any number of modern female icons who broke barriers or challenged the status quo for women; HIlary, Madonna, Naomi (Klein), Susan (Faludi), to name a few. Still, Thelma and Louise represent something deeper about chicks in America. Thelma and Louise are the tragic "every woman." The unsung fight against the grey barriers that acknowledge women are equal but perpetuate (sometimes) unintentional, unenlightened, or just plain unchallenged views that women are somehow something to be controlled. The tragedy is not lost on us that just like Thelma and Louise from the film, our girls are doomed to live forever in a cage (though a very nice one.) Hopefully, as chickens this will be a much more agreeable environment and they will not make the same dramatic choice about their future.

It may be ironic that Ginger, our bold potential rooster, is also the first to fly the brooder. She perches on its wall as we enter and brazenly chirps hello with nary a hip swagger or flirtatious wink. I have been told since my last post by those who know, it is just as often the young rooster who is the most shy and quiet. "You can't tell a rooster until it crows." That is sound advice too for kids growing up in a world where gender shouldn't matter until it matters.
Posted by City Kid Farm at 8:00 PM