What in the world do you do with chicks?

We've been quite popular in the few days since the chicks arrived. People are dropping by to see where, how and why we have six birds living in our closet. Actually the brooder, the enclosure we keep them in, is in the closet. So, no, the chicks are not fending for themselves amongst the shoes. Our research has shown that this would not be wise. The things that chicks need most are not all that different from babies of other species. Warmth, food and water are key, but they also need to be protected from predators and drafts as well as be socialized to be part of the family.

Since we only have a half dozen birds, we were able to keep our brooder relatively small. 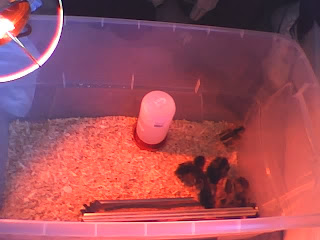 We used a 110 liter plastic tub to keep the chicks safe and draft free. The bottom of the tub is covered in aspen shavings which they love to scratch around in. We were advised against our original plan to use a 100 watt bulb in a reflective lamp since the chicks need a basking spot of 95 degrees. We were upsold a 250 watt red bulb and a clamp lamp that has a fire guard in case it tumbles into the brooder. The red bulb is more expensive but less stressful to the animals since it needs to be left on for 24 hours. This also allows the chicks to have a sense of natural light change from the nearby window.

We wasted $4 on a cheapie thermometer to keep track of the brooder temperature. A better investment is a digital thermometer you can find at a pet store in the reptile supply section. This will run you anywhere from $4 - $10 but it won't leak, pop, or shatter.

We also purchased a small waterer ($3) and a metal feed tray ($7) and chicken starter food. There is a debate about whether or not to go organic with the chicken starter. Chicks are susceptible to illness and the non-organic feed has medicine that protects them from coccidiosis, a parasite that they can pick up from eating others' poop. Since the first thing a new born chick does is eat another chick's poop, we weren't ready to debate and bought the medicated feed.

Was medicated feed necessary? Probably not, but being new to this we decided to play the safe side. They don't seem to be complaining. 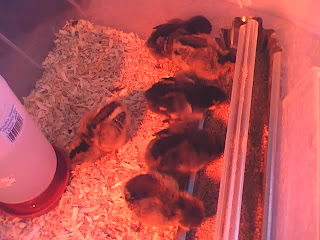