Digging Hurts: A Moment of Crisis

We spent the bulk of the weekend tearing out huge chunks of the lawn. Saturday was one of those picture perfect days, high seventies, dry as anything and the sounds and smells of spring rippled through the air. We built on the work that had been done earlier and by the end of Sunday had nine beds dug and the sod covering the future flower bed carved. The sod was much easier to lift than anticipated and that had us smiling since a worst case scenario had us rent a sod lifter for $200. Yay. Money saved! As an added bonus, due to the beautiful weather, we made contact with people who were out walking in our neighborhood. They were all smiles seeing us in the yard getting all earthy and making "improvements" to our tiny lot. It was great. For those few moments we were so sure that we are on the right track, doing something that others may see as interesting and accept as a lawn alternative. Most passers by even overlooked the smell that was last year's compost - a revolting sludge of nutritiousness that formed on the bottom of a Rubbermaid bin full of leaves.

Then there was a pause in all the activity. 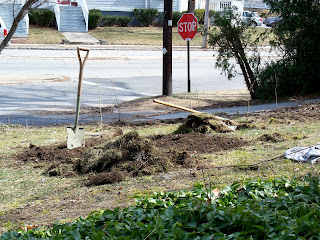 Are we over extending ourselves?

We started the experiment with one adult collecting on a decent severance package and job hunting, while the other worked a taxing eight hours with added hours to follow through after work. The fantasy of the garden, chickens and eventual food was a fantastic way to carry us through the dark, frigid months until spring. Spring is here, the lawn is shattered and there is a moment of crisis at hand. Steady employment beckons and, starting soon, we will be down to late arrivals from work, cranky kids, and weekends committed to gardening and the cosmetic surgery our yard is in desperate need of.

Do we need to have the dirt tested?

I was chatting via email with a friend back in Brooklyn who told me that someone who went to school with my brother had put himself and the local food movement to the test. Manny Howard wrote about his urban farming experiment for New York Magazine. You can read his very enlightening and entertaining article here. Howard sets himself up with the improbable task of growing all the food he needs to feed himself for one month. He's a great writer and makes the most of all the drama and friction that his situation throws at him. I don't know if there could be a better recommendation to read his article than to be able to tell friends you read the original piece before the movie came out. From what I hear, Howard has nabbed a movie deal from his experience. Fittingly, his book My Empire of Dirt will be released at the end of April.

Even with all the drama in his article, one thing continues to haunt me: he had his soil tested.

We bought a soil testing kit from Home Depot to tell us how our dirt stood up in the soil ph wars. Do we need more loam? Lime? These questions seem inadequate now. You see, Howard sent out a sample of his soil to smart people using sophisticated equipment and they found high levels of all kinds of crazy poisons that might qualify his yard for a Superfund site. We never considered that there might be things like lead or other toxins lurking in our dirt and eventually our food.

Our house was built in 1889 and has been renovated several times since. Who knows if a previous owner chucked all the lead painted, asbestos coated whatever to use as fill before trucking in dirt for a yard? We took samples to send out to U Mass, a land grant college. They are there to help people the average person with things like whether there are heavy metals in your future vegetable garden.

We're down to our last week with an available adult for any kind of manual labor Monday through Friday. It is also only the second week that the yard has been workable. If we don't do it now, we won't be on schedule to get the seeds out that need to be planted into beds. We'll also be stuck with all these seedlings that are lining every flat surface by a window. Waiting will also give us a chance to heal. Did we mention that digging up plots of sod, hauling dirt, and pounding in wood hurts the post 40, generally inactive body?

Despite the initial setbacks, real or imagined, we think we're going to keep at it.
Posted by City Kid Farm at 9:34 PM